why is tritium recycling  important?

Tritium battery is a nuclear battery that has a 20+ year lifetime of continuous power without needing a replacement or recharging. When the battery runs out of power, it decays to a stable state, which means no leftover nuclear waste.

They perform like photovoltaic cells, which are semi conducting diodes, in which current flows when a photon strikes the diode junction, freeing an electron. In a betavoltaic cell, an electron, is generated by a small radioactive source (called betalight), which triggers the diode rather than a photon. This technology is essentially safe as the beta particles that the isotopes emit are very low energy and can be easily shielded.
Betavoltaic devices are particularly well-suited to low-power electrical applications where long life of the energy source is needed, such as implantable medical devices or military and space applications.
For more information, please click on the link below;
Tritium Nuclear Battery or Radioisotope Photovoltaic Generator

Scientists at the UK Atomic Energy Authority are working with academics at the University of Bristol on world-leading technology in order to make diamond batteries, which could provide decades or thousands of years’ worth of energy without a recharge. when the nuclear battery runs out of power, it decays to a stable state, which means no leftover nuclear waste.
The battery would be powered by small amounts of graphite from former nuclear reactors – presenting the opportunity to recycle both carbon-14 and tritium into micro-power diamond devices.
The devices operate in a similar way to the photovoltaics used in solar panels (where the conversion of light into electricity occurs) but these devices will harness fast electrons from within the diamond structure rather than using particles of light (photons).

For more information, please click on the link below.
Are Radioactive Diamond Batteries a Cure for Nuclear Waste?
Diamond Nuclear Batteries Are Forever

ITER the most well know mega project.
The amount of fusion energy a tokamak is capable of producing is a direct result of the number of fusion reactions taking place in its core. Scientists know that the larger the vessel, the larger the volume of the plasma ... and therefore the greater the potential for fusion energy.

With ten times the plasma volume of the largest machine operating today, the ITER Tokamak will be a unique experimental tool, capable of longer plasmas and better confinement. The machine has been designed specifically to:

For more information, please click on the link below.
ITER ("The Way" in Latin) is one of the most ambitious energy projects in the world today.
Fusion Power Explained - How does Fusion Energy work

Atomic battery, nuclear battery, tritium battery and radioisotope generator, all are used to designate a device, which expends energy from the decay of a radioactive isotope to produce electricity. 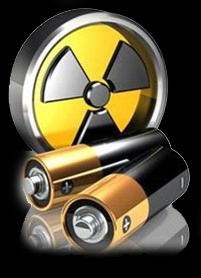